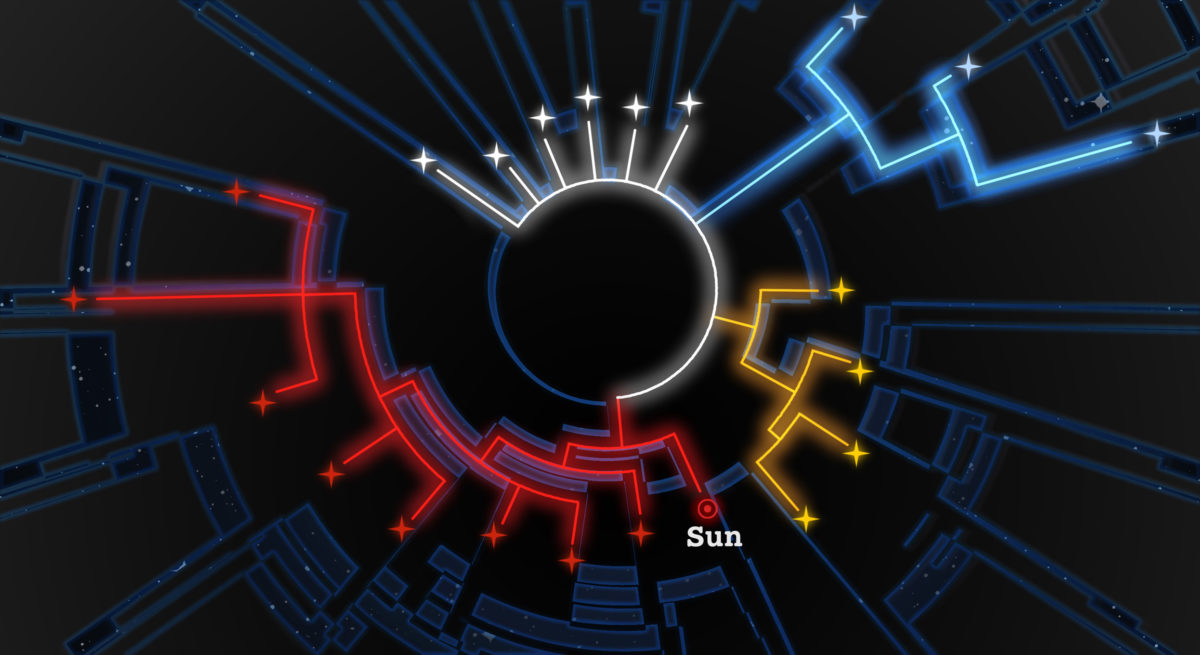 A massive star burns up its fuel by cooking heavier and heavier elements up the periodic table to iron. An iron core, however, is unstable because it can’t support the gravity of the outer layers. Thus it collapses, releasing a massive amount of energy and neutrons. Neutrons quickly get captured by the different nuclei produced during the star’s lifetime. This ‘capture’ creates even heavier elements and the entire energetic process destroys the star through an incredible supernova.

The first generations of stars in our Galaxy were born 13 billion years ago. About 50 stellar generations had already passed by the time the Sun and its siblings were formed. Each of these generations has small stars like the Sun which live very long. Because they’re long-lived their atmospheres encode the pristine chemical makeup of the gas cloud from which they formed. This makes them “fossils” that hold information about their ages and locations in the Galaxy through the science we now call Galactic archaeology.

I am a scientist who measures chemical elements of stars to answer questions about how our Galaxy formed and how it evolves. In 2013, I moved to Cambridge to work on a project called Gaia-ESO, which determines the chemical make-up of thousands of stars.

With colleagues in Barcelona and Oxford, we applied phylogenetic tools on a star sample and created the first stellar tree. This tree allows us to classify the stars according to their chemical pattern and understand their relationships and shared history. The tree turned out to have three main branches. This meant that we had three different stellar families in our sample. Knowing the stars’ movements and ages, we identified one branch as stars that originated in the thick disc of the Milky Way. The second is stars from the thin disc. The third branch holds a mystery. We had discovered something new whose nature remains to be unveiled. These could be stars born much closer to the centre of our Galaxy and then migrated to our neighbourhood. They could even be of extragalactic origin. At the moment we can’t tell. We need more stars, more chemical elements or more methods to build trees. The future looks very exciting.

I am now a professor of astronomy at Universidad Diego Portales in Chile. I have been successful in obtaining financial support from the Chilean government to continue these investigations.

Ken then nominated me to be one of the Scientist-to-Watch in 2018 by Science News. I was selected among more than 60 young scientists nominated by Nobel laureates and members of the National Academy of Sciences. It is an honour to receive such recognition and for my scientific theories to be regarded as revolutionary. This assures me that I can trust my instinct to understand nature and our Galaxy. Being the first Latin-American woman to be awarded such international recognition has also been the pride of my country, Chile, who recently named me as one of the 100 women leaders in 2018. This is very important to me because we need support to invest in science, and even more so for women scientists.

Big discoveries come accompanied with big lessons. I learned that beyond the technicalities of the ‘how’, it’s most important to find the essence of the ‘why’.  I hope my work inspires others not to get trapped in people’s opinions and that by anticipating failure one may miss the opportunity to score big wins.

Darwin was revolutionary in his idea of connecting all living beings on Earth in the Tree of Life. The stars in our Galaxy are also connected. It’s only a matter of time until we unravel the cosmic tree of stars.

Paula is an assistant professor at Diego Portales University, Chile. She was named as Chilean Woman Leader in 2011 and 2018 and was selected as a "Scientist to Watch" by Science News in 2018. She studied astronomy in Pontificia Universidad Catolica de Chile and received her PhD from Ludwig Maximilian University and Max Planck Institute of Astrophysics in Germany. She was a postdoc researcher in Laboratoire d’Astrophysique de Bordeaux in France and at the Institute of Astronomy, University of Cambridge.

This website uses cookies to improve your experience while you navigate through the website. Out of these cookies, the cookies that are categorized as necessary are stored on your browser as they are essential for the working of basic functionalities of the website. We also use third-party cookies that help us analyze and understand how you use this website. These cookies will be stored in your browser only with your consent. You also have the option to opt-out of these cookies. But opting out of some of these cookies may have an effect on your browsing experience.
Necessary Always Enabled
Necessary cookies are absolutely essential for the website to function properly. This category only includes cookies that ensures basic functionalities and security features of the website. These cookies do not store any personal information.
Non-necessary
Any cookies that may not be particularly necessary for the website to function and is used specifically to collect user personal data via analytics, ads, other embedded contents are termed as non-necessary cookies. It is mandatory to procure user consent prior to running these cookies on your website.
SAVE & ACCEPT